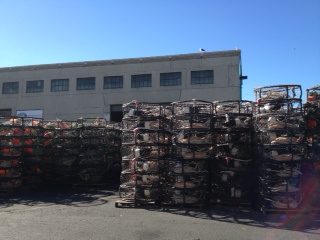 The moment we begin to see stacks of crab pots lining the piers the anticipation of the local Dungeness Crab Season begins. In fact, the season is 4 weeks away. Each day we see more and more stacks of crab pots. The fishermen are making repairs on the pots and deciding what bait they will fill the bait jars with. I see more and more of them congregating in the coffee shops. This is when sometimes a “buyer” becomes the enemy. They start to think about how much money they should get for “their crabs”. As a buyer, we have to look at the global economics. What can the market bear? Are people buying crabs? What forms of crabs are moving? Live? Cooked? We look forward to the hard work it takes to bring delicious Dungeness Crabs to each and everyone’s plates. See you soon!

Our local Dungeness Crab Season opened on time November 15th. We unloaded the first catch in the wee hours of the morning. Crabs were on the smaller size weighing 1 1/2 to 1 3/4 lbs. The first batch cooked showed us that the meat was jammed packed in the body cavity. The meat was so sweet tasting we ended up licking our fingers after every bite.
One very late night or early morning (1 AM) we had just finished unloading and were loading our live tanks with crab. I like to work with the front doors open but barricaded. We never know what to expect down here at the Wharf in the wee hours of the morning. Of course, it was our lucky night! A woman pushed back our barricades and planted herself in the corner taking selfies of herself while waiting for someone to pick her up. She claimed she was being followed. We continued to keep our eyes on her as we continued working. She finally got picked up 30 minutes later.
Come to find out our neighbors told her to leave. They could have come over and let us know. At least she was in a safe place with us and the crabs!
Weather turned bad in December. There were only 3 ports crabbing – SF, Bodega Bay, and Half Moon Bay servicing the entire world during the holidays. Crabs became very scarce. Our customers who ordered early were ensured crabs for their holiday meals.
January 4th, 2019 ports in Oregon and Washington began crabbing which has put more crab on the market. Perfect timing for the Crab Feeds schools and other charitiable organizations begin to have. It’s also NFL Playoff time and crabs always make good tail gating meals. Enjoy the crabs this season!

Here we are again . . . the day before the local SF Dungeness Crab Season begins.  As we were crossing the Golden Gate Bridge in the dark, we saw all the fleet of crab boats making their way towards their fishing grounds.  White lights reflecting on a calm ocean.  Can’t wait to drive across the bridge tomorrow morning and see the twinkling white lights on the horizon.  It is truly an amazing sight like the twinkling lights on Christmas trees.  While the fishermen were busy baiting the jars dangling from the center of the pots, we were busy readying our live tanks, making lots of ice, and answering phones.  Tonight we all get a good night’s sleep since we don’t know what time the boats will return.  There is a strong storm brewing so hopefully the fishermen will get 1 pull in before having to hide in a cove or return quickly to the docks.  Safe travels to our fishermen. We just put our heads down so we thought but SF Fisherman’s Wharf was noisy tonight.  People talking loudly and cars whizzing driving by.  Around 1:30 am the In/Out Semi truck parked on the corner.  Our neighbor arrived at 1:58 am because we heard the sound of the car remote locking the car.  I guess it was time to rise and shine?  Although hadn’t I already done that around 1:30 am?  Sounds of the morning had begun.  Day 2 was just beginning.  Time to get my makeup on before sister #1 arrives with our security force.  I’ll let my son sleep until we’ve gotten the our coffee brewing and we’ve opened the roll up doors.  Crab Aficionado will be early in anticipation for those “first of the season local Dungeness Crabs”.  Sister #3 will be busy answering one phone call after another.   Crab Season hopefully be very busy with lots and crabs being unloaded and sold!