TheSunday mornings are my weekly shopping days. I like to go early before the crowds get up even though it is my day off. Since my cart is fuller than most I usually let others go first with smaller carts. Today, there was only one checker working. My cart was full and three others waiting behind me had less than 10 items. Of course, I suggested they go before me. One older man told me he wife would be very grateful for the courtesy. We got talking while we waited. I told him the longer checking out time allowed me the opportunity not to rush home to the mounds of laundry, the gardening, and my three sons! He was surprised that I was already out and about. I mentioned that my husband was with the garbage company and I was in the fish business. We were both used to early mornings. It was then that he asked me a question pertaining to the fish business. He wanted to know why he would only see Atlantic Salmon in stores. Why wasn’t there any Pacific Salmon sold in stores?  What was the difference between Atlantic Salmon vs wild Salmon?

There is one very important difference between the Atlantic Salmon vs wild salmon found in markets.  The Atlantic Salmon found in markets is farmed salmon. Anytime you see the word Atlantic before the word salmon in a market remember that it is farm raised. There also is a Pacific Salmon that is farmed. What you really need to be on the lookout for are the words wild caught salmon. Those two words will tell you that the fish has not been farmed. Wild King Salmon is sold in California during the specific season the Federal Government determines yearly. In Alaska, you can find wild caught King Salmon (Chinook), Sockeye, Pinks, Chum Salmon.  There are a few Atlantic Salmon found in rivers in Maine; however, commercial fishing is prohibited.

We only sell wild Salmon – whole, filleted, or steaked.  Customers buy whole fish that we portion out for them and freeze.  Once King Salmon season is over we start the local Dungeness Crab season.  Wild caught fish we believe is the best! 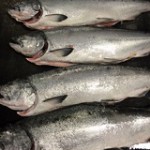